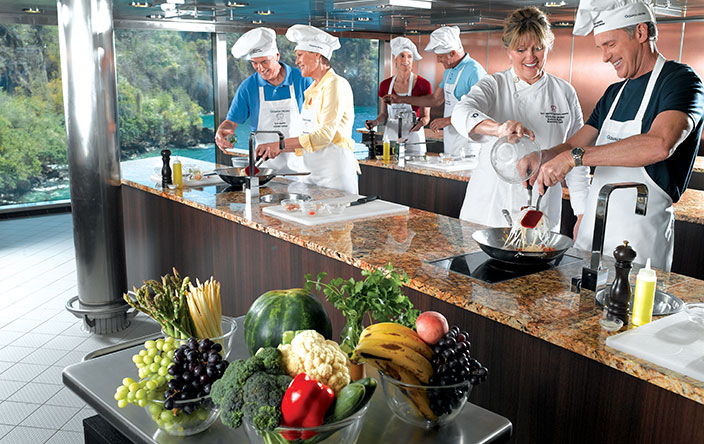 Our clients who like an upscale cruise vacation love Oceania Cruises. What you might not appreciate about Oceania Cruise is that if you are a foodie or an aspiring chef, you will really love cruising on Oceania.

Oceania Cruises is well-known for its culinary options on its fleet, but they also entice foodies  with the luxury cruise line by offering exceptional cooking classes offered aboard both the Riviera and Marina as well as full and half-day Culinary Discovery Tours led by its chefs on its entire fleet at various ports of call.

Culinary Discovery Tours offer you the opportunity to have firsthand experience with the culinary culture of worldwide destinations. At various ports of call you will vist the local markets where you will find the colorful produce, fresh fish and exotic spices used in traditional recipes that inspire people to gather around the table. You are accompanied by a master chef as you tour a winery in Madeira or a fish market in Rio de Janeiro, You will taste the authentic flavors of a region, learn techniques in local cooking classes and then hone your skills at The Culinary Center back on board the ship.

Oceania’s Director of Culinary Enrichment, Chef Kathryn Kelly, designed each of the culinary discovery tours offered by the cruise line. Kelly has extensive culinary experience both as a gourmet chef and owner of a restaurant as well as a member of the faculty of the Culinary Institute of America. We should also mention Kathryn is also a graduate of the Culinary Institute of America.

Oceania probably has the best hands-on cooking program offered by any cruise ship. Oceania offers several classes from which you can choose on its Marina and Riviera ships. The number of classes that are offered is dependent on the length and itinerary of the cruise. Participants explore cuisines and ingredients and learn culinary techniques, which they can later use at home.

The Culinary Arts Kitchens aboard the Marina and Riviera ships easily rival not just the cooking classes on any other cruise line but also most professional cooking schools around the world. The equipment is state-of-the-art and in a prime location on an upper deck of the ship with large picture windows that offer spectacular views and natural light.

Each class begins with a cooking demonstration led by the Chef. Students are then assigned to a station where they prepare the same dishes and then dine on their creations that are paired with a glass of wine. The wine does seem to make everything taste so much better.

There are classes on several of the Marina and Riviera itineraries that feature Arabesque, Sicilian, Cuban cuisine, as well as a Fish Master Class, Paella Master Class and courses that focus on such foods as pasta, pizza, tapas, crepes and favorites from the Red Ginger restaurant menu.

In fact Oceania has announced that all of their sailings going to Cuba will now offer several Cuban dishes on the menu and will be highlighted in the Culinary Arts Kitchen.

Passengers can take their culinary exploration one step further by signing up to participate in a Culinary Discovery Tour which offers the opportunity to experience firsthand the local culture of the destination. Oceania chefs lead tours that might include a visit to a local market, a winery or a selected Michelin-starred restaurant. On these tours the chef will educate the participants on selecting produce, fresh fish and spices used in traditional recipes.

Here are some examples of other Culinary Discovery Tours that are offered on Oceania. On a cruise that includes a stop at Casablanca, there is a chef-led tour of an olive market and the Central Market in town where participants forage for such ingredients as olives, preserved lemons, rose water and tagine. These ingredients are later used during a 90-minute long Moroccan cooking class in the Culinary Center on the ship.

Passengers on cruises that stop at Monte Carlo have the opportunity to sign up for a Discovery Tour that features a visit to the Nice market and lunch at the famous Chateau Eza with a menu developed by Chef Kelly (with each course explained by the chef including cooking techniques and ingredients used).

On cruises that stop at the Argostoli port in Greece, passengers can sign up for a Chef Foraging Tour of Cephalonia and Greek Cooking Class.

As the Culinary Discovery Tours and cooking classes are extremely popular, it is advisable to enroll in them well before boarding the ship. We discovered the programs are often sold out months in advance. So the sooner you book your Oceania Cruise the better your chances are of reserving your seat on a Culinary Discover Tour.

So when you are ready to book your Oceania Cruise and experience this wonderful foodie experience, contact any of the agents at Dynamic Travel & Cruises by calling 817 481-8631 or 800 766-2911..

Be sure and sign up for our DynamicTravel.com emails. A weekly email with travel news and deals that you can get it at home and or work. Just click here and sign up!

Check out the video below on the Epicurean Insider as they explore cheeses in Livorno!

This website uses cookies to improve your experience while you navigate through the website. Out of these cookies, the cookies that are categorized as necessary are stored on your browser as they are essential for the working of basic functionalities of the website. We also use third-party cookies that help us analyze and understand how you use this website. These cookies will be stored in your browser only with your consent. You also have the option to opt-out of these cookies. But opting out of some of these cookies may have an effect on your browsing experience.
Necessary Always Enabled
Necessary cookies are absolutely essential for the website to function properly. This category only includes cookies that ensures basic functionalities and security features of the website. These cookies do not store any personal information.
Non-necessary
Any cookies that may not be particularly necessary for the website to function and is used specifically to collect user personal data via analytics, ads, other embedded contents are termed as non-necessary cookies. It is mandatory to procure user consent prior to running these cookies on your website.
SAVE & ACCEPT